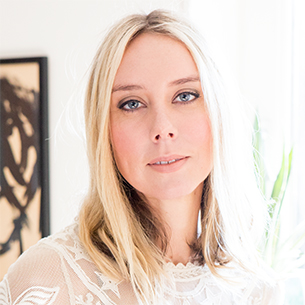 Jessica Richards, Founder and Owner of SHEN Beauty, was born in France and raised in Laguna Beach, California. While in high school, Richards began working at a local surf shop.  The store owners quickly saw how impeccable her taste was and promoted her within weeks to head buyer. After graduation Jessica moved to Aspen, Colorado, where she brought super chic, lesser-known lifestyle brands to the snowboard shop with a cult following, Polar Revolution.

Richards attended the Fashion Institute of Technology where she earned her Bachelors degree in fashion merchandising and marketing in 2007. Following college, she landed a highly coveted position as a fashion assistant at Vogue.  During her tenure at the fashion bible, Jessica also grew her freelance styling portfolio with a clientele list of boldfaced names featuring notables in the music industry.

Shortly thereafter Richards gave birth to her first son as well as the idea to create SHEN.   After a jar of face cream shattered she was sent wandering Brooklyn in search of a suitable replacement and came up empty handed with the realization that there was “no beauty in Brooklyn.” The idea of SHEN was born.  Putting her retail expertise and her connoisseurship of beauty products to good use, the beauty destination became a reality in 2010. As a haven for undiscovered, organic lines and exclusive imports from around the world, SHEN quickly attracted consumers from Manhattan, Europe, Asia and beyond.

Jessica is renowned in the industry for her considered, relevant curation, and was the first to introduce Amanda Lacey, Kate Logan, Percy & Reed, Aurelia, Ilia, Georgia Louise, Pursoma, Therapie Roques Oneil, and Suman to the American market. She has been featured in the New York Times, Wall Street Journal, Vanity Fair, Allure, Harper’s Bazaar, The Huffington Post and Goop and currently serves as the Beauty and Wellness Director for Free People where she is overseeing the brands first foray into color cosmetics, skincare, frgarance and more.  Jessica also serves as an advisor to multiple beauty brands as well as the Indie Beauty Expo.